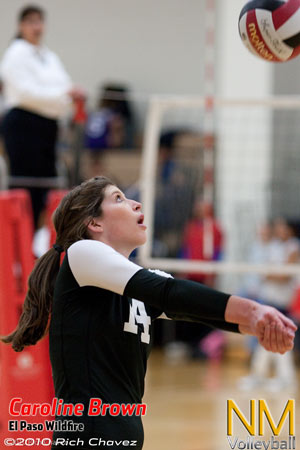 A nice little article was released by the Davidson College Sports Information Department about their volleyball program’s recent signees; one of which is El Paso Coronado’s Caroline Brown. Brown, who also played club with El Paso Wildfire for six years, is an outstanding athlete and a leader on and off the court.

An outside hitter from El Paso, Texas, Brown was the 2009 1-5A and El Paso Times Most Valuable Player and a two-time member of both the All-District First Team and All-City First Team. The four-year varsity letter winner was team captain of her Coronado High School team as a junior and senior. In 2009, she was also a member of the Texas Girls Coaches Association All-State team, received the Amateur Athlete Award in volleyball from the Sunturians and was named Player of the Week, All-Texas, by Lone Star Volleyball. Brown played club volleyball for the El Paso Wildfire Club for six years and was a two-time team captain. Her team earned the No. 1 seed in the Nationals division in both 2009 and 2008 and advanced to the National Jr. Championships in 2010.

The daughter of Will and Katherine, Brown was a member of the National Honor Society, a member of Who’s Who of American High School Students, 2009 Homecoming Queen and a four-year member of the school’s Executive Council and Student Council. She received the EPISD District Athletic/Academic Award for having over a 90 average in 2009. She has a brother, Beck, and sister, Marshall.

“Caroline is an exceptional athlete,” Cowie said. “Lina always seems to find a way to help her team win, whether it is terminating a swing or getting a timely dig.”