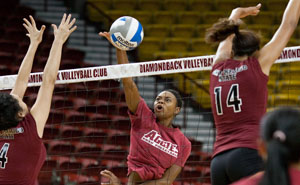 The Aggies continued a streak of twelve straight victories on Friday night after beating the Miners. The Aggies swept right through the Miners, which has been a common theme. Nine of those 12-straight wins have been sweeps. Twice the Aggies have won by 3-1 scores and last year UTEP pushed NMSU to five sets.

“We love that,” NM State head coach Mike Jordan said. “We love it for our fans, we love it for the university and the city of Las Cruces. It is a big deal. We don’t take it for granted. At the same time, we’re going out and we have one intention and that’s to win.”

And win they do, particularly against the Miners. NM State has now been victorious in 16 of its last 17 matches against UTEP in one of the rivalry’s sports series that remains one-sided.

The Aggies received a strong performance from the senior outstide hitter Kayliegh Giddens, who hammered home 17 kills on the evening and was a physical presence around the net throughout. She also had eight digs, a number that brought a smile to Jordan’s face.

“The great thing about Kayleigh is she’s in really good shape where as last year she wasn’t,” Jordan said. “She can play hard defensively as well as offensively. She’s just our go-to player, not just in the front row but in the back row”

Setter Jennah DeVries had 38 assists and nine digs while freshman Rocio Gutierrez had 10 digs as well.  Junior middle hitter Kelsey Brennan added eight kills while senior Whitney Woods had seven of her own.

“They always play hard against us,” NMSU middle hitter Kelsey Brennan said. “We always come out and bring it right back at them. I think consistently we’re more of a physical team which in the end gives us an advantage.”

Friday’s match saw UTEP battle – here and there. Set No. 2 wasn’t easy for the Aggies, with the Miners taking a 9-7 lead early and tying the score, 23-23, late. Consecutive kills by Aggie freshman Desiree Scott – she had seven on the evening – put an end to any Aggie concerns.

NM State came out in the third frame and quickly put things away, going up 9-4, 14-6 and coasting from there.

“We put sophomore outside hitter Stephanie Ziegler in the lineup; she came in, blocked a couple balls for us, took a big swing, gave us a lift,” Jordan said of his team’s third-set push. “I thought that was great. And we served it a little bit better.”

“It’s a rivalry, so it matters,” Brennan said. “You don’t want to be that team that loses that streak. It’s an expectation. We always know they’re going to put up a fight and we always have to bring our A-game.”