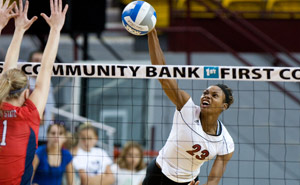 The District 5-4A between St. Pius and Albuquerque Academy has been moved from 7:00 PM to 3:00 PM at St. Pius High School. No word on the reason for the move,  just make it to the game! Thanks to Joe W. for the heads-up.

Having been burned in their two regular season games to Mayfield, the Bulldawgs took their “A” game to Mayfield and paid back their debt in three easy payments (in the form of winning sets).

Not sure what got into the Bulldawgs, but they looked ferocious; Sarah Fountain and the crew looked much more determined than I had seen all season.

Expect fireworks if they can play this well on Saturday against No. 1 Gadsden.

Battling back for an opening-set win, the Las Cruces Bulldawgs knew it might be their night to knock off the Mayfield Trojans.

The Bulldawgs will now play for the district championship on Saturday at 2 p.m. against Gadsden High School. The match will be played at Santa Teresa High School, as Gadsden’s gym is undergoing maintenance work.

“I think we were fortunate in Game 1 — we came back from three or four points down,” LCHS head coach Keith Leupold said. “When we won that game and got off to a good lead in Game 2, I felt good about the momentum swinging our way.”

It was the third time the rivals met on the volleyball court this year, with Mayfield winning the first two contests fairly easily.

The Bulldawgs were able to flip the script on Thursday by tweaking the gameplan.

LCHS spread the ball around to three attackers up front, as Sarah Fountain (12 kills), Sarah Hurd (10 kills) and Lexi Dotson (seven kills) all got into the scoring column — and kept the Trojans off balance at the front of the net.

The Bulldawgs also focused on their serving game, led by Alexis Murillo, who spearheaded the attack in a dominant second set for LCHS.

After falling behind 20-16 in the opening frame, the Bulldawgs rattled off a 9-2 run to take control. Set 2 saw Las Cruces High blow the doors off, hammering out a 20-8 lead in front of a raucous crowd at Mayfield High School.

“Last time we gave them 22 points serving,” Murillo said. “We keyed in on that and who the (Trojans’) hitters were and threw them off their transitions.”

Leupold was complimentary of his sophomore server.

“(Murillo) was solid tonight,” he said. “She has a nasty serve — it moves well, she hits it hard. We feel like, when she’s on, we score points.”

The Bulldawgs entered the match with the No. 5 ranking in the state, while Mayfield came in ranked No. 7. The seeding committee will meet on Sunday to determine which teams get into the state tournament. While LCHS and Gadsden, the No. 2 team in New Mexico, are all but assured berths at this point, the Trojans will have to wait and see.

“I think we will (get in), but that doesn’t mean jack,” head coach Mike Sautter said. “I thought we were gonna win tonight too but I obviously was wrong there.

“My hat’s off to Cruces. They came in prepared to do well and we made too many errors….You can’t win championship games when you’re error-prone.”

The Bulldawgs believe they match up well with the Panthers. They’ll get a chance to prove it once and for all on Saturday. GHS leads the season series 3-0.

“We’re excited,” Fountain said of another rematch. “We can do it. I know we can.”

Setter Brandi Torr left the game in the second set with an undetermined knee injury. Julia Warren, who up to that point had 15 kills, picked up setting duties, but it wasn’t enough.

Sandia now heads to Eldorado to face the Golden Eagles for the 2-5A championship on Saturday.