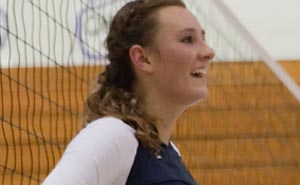 Another area player making a name for herself is Jillian Davis, former outside hitter for El Paso Coronado. Davis also made her mark playing with the El Paso Wildfire and El Paso Sunspots.

Davis has been named NCAA Division III West Region Freshman of the Year by the American Volleyball Coaches Association (AVCA) playing her first year on the Whitman College volleyball team.