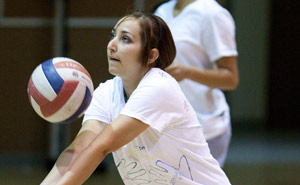 Check back in the next few days for my interview with La Cueva’s monster outside hitter, Julia Warren.

There is a Sun-News article on the various volleyball teams opening play tonight against the El Paso schools. Mike Sautter, head coach at Mayfield, talks about the purpose of opening against El Paso schools. Mayfield hosts Americas, Cruces travels to Franklin and Oñate is at Hanks–looks like it might be a tough night.

Read about prep sports opening up

Riding hot on the heels of a very successful 2009 season, the Lobos look to fire up their performance “3 notches” this season. With a schedule that’s difficult at best, the UNM squad thinks they’re up to the task—I think they may be right.

Read about the motivated Lobos at GoLobos.com.

Grants working hard in the off season

Going 3-14 (0-7) last season the Pirates now have a junior and senior-heavy squad and worked hard in the off season. Good luck Pirates, and give it your all.

Read about the Grants off season efforts in the Cibola Beacon