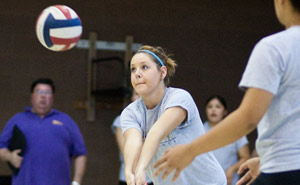 The University of Nebraska at Kearney is predicted to win the Rocky Mountain Athletic Conference East Division and regular season titles again this year according to the Preseason Volleyball Coaches Poll. Western New Mexico is picked to finish second in the West Division but predicted to finish seventh overall.

The Lopers, who are the six-time defending RMAC regular season champions, are led by Preseason Setter of the Year Cola Svec (Elkhorn, NE) and Preseason Defensive Player of the Year Katlyn Heiserman (Manchester, IA).

In the West, Mesa State takes the top spot with Adams State and Western State following Western New Mexico. Fort Lewis, CSU-Pueblo and New Mexico Highlands round out the division.

The Mustangs did not place anyone on the Preseason All-Conference Team.

The RMAC Volleyball Championships will be November 11-13. Three weeks prior to the championships, the top team in the league at that time with an acceptable bid will host the tournament. The top eight schools at the end of the regular season qualify for the RMAC Tournament.

For more information, including the preseason all-conference team and awards, go to: