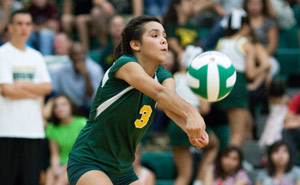 Mayfield falls to Americas in three

The Trojans let their nerves get to them in this one, losing in three straight sets, 22-25, 17-25, 19-25. Callie Chamber lead Mayfield with 11 kills, and Allyson Lucht, improving each game, racked up nine kills.

Up next for the Trojans: Franklin!

Coronado’s Rose Diaz had a good night against Chapin with nine kills and 24 digs.

Speaking of Chapin, Felix Chavez of the El Paso Times has reported that Megan Dominguez has committed to Texas Tech. Congrats Megan!

Goddard volleyball looking to re-invent themselves

The Chaves County Sports Report posted an article on the Goddard squad and their push for a new identity. After a successful season in 2009, they’ve got a lot of work to do.

Visit CCSR.com for the full story.

The Journal is running a story about the UNM’s reaction to being picked fourth in the conference, and the fact Taylor Hadfield, an honorable mention All-American last year, was overlooked for the All-MWC team.

View the story on the Journal (subscription is required)