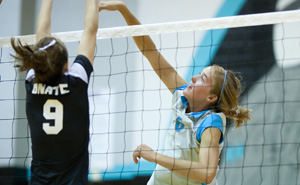 Congratulations to Cleveland’s Cassie House for recently being named the Albuquerque Metro Player of the Week.

Cassie, a freshman playing for Ben Wallis, earned the honor for her performance at the Margaret Hussmann Tournament of Champions and being a wicked playmaker on the court. Through the first four matches of the season, Cassie had earned 44 kills, 15 blocks, averaged 2.75 kills per game and a hitting percentage of .237–nice!