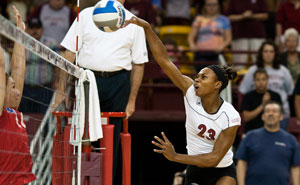 Radio Coverage: Wednesday’s match this week will be aired over the radio waves with Kyle Doperalski giving the play-by-play action on KSNM AM 570 in Las Cruces. The match against the Wahine ,Sept. 29 starts at 8:00 p.m. (MT) with a pre-match show with head coach Mike Jordan starting 15 minutes prior to the match.  Aggie fans can also catch the action from anywhere around the world on the Internet by going to www.NMStateSports.com. Just click on the live events link to access the coverage.

Television Coverage: With the success NM State volleyball and AggieVision have had in recent years, the Aggies are scheduled to play on TV eight times this season, including seven matches produced by Aggie Vision and one by ESPNU.  NM State played on TV eight times last season, which included the Western Athletic Conference championship on ESPNU.  The 2010 WAC Championship match is scheduled to air on ESPNU once again this season. The matches will be aired live on Las Cruces (Ch. 4), Albuquerque (Ch. 77), Gallup (Ch. 66), and Santa Fe (Ch. 21). FSN-Arizona will also carry selected matches live and others will be on tape delay, while ESPN3.com will also be airing all AggieVision produced matches live.

This week the Aggies face No. 6 Hawai’i on ESPNU, Wednesday, Sept 29 at 8:00 p.m. (MT).  NM State then takes on Arizona on FSN-Arizona and throughout the state of New Mexico on Comcast. That broadcast is being produced by AggieVision.