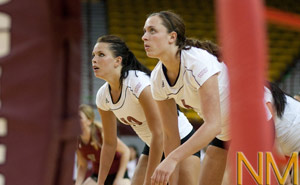 Senior Kayleigh Giddens led the Aggies with 12 kills for the game, followed by seniors Whitney Woods and Kelsey Brennan with six apiece.  Jennah DeVries added 27 assists to her season total.  DeVries and freshman Rocio Gutierrez each finished with six digs to lead the team.

Hawai’i continued to attack NM State in the second set, winning 25-14.  NM State came out strong in the second set with a kill by Giddens to give the Aggies the first point of the set.  NM State continued to fight strong, earning a 4-2 lead, the highest lead for the Aggies for the match.  Hawaii began to apply the pressure, scoring six straight to bring the score to 8-4.  The Wahine became more efficient, posting a kill percentage of .435 and their defense became more effective, lowering NM State’s kill percentage to .032.  Giddens added three more kills to her game total, and DeVries had nine assists.

The Aggies play again, Sunday, Oct. 3 against Arizona in the Pan American Center with first serve at 5:30 p.m. (MT).  The match will be broadcast on TV by the AggieVision Production Team.  The game will be live on FSN-Arizona and Comcast around the state of New Mexico.  Check your local listings for showtimes.