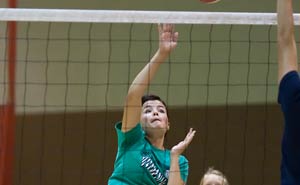 Looks like the Rangers are getting recognition in the Lone Star state, earning a #13 ranking in the Texas Girls Coaches Association volleyball poll. The Rangers host San Elizario tonight at 6:30.

Read about about the top 20 ranked Rangers in the El Paso Times.

There is also a blog post on the “Meet the Preps” site about Riverside.

Mayfield has recovered from their service-error problems encountered at the Las Cruces game, playing Alamogordo tough on Saturday. With that loose end tied up, the Trojans will need to focus on a more consistent hitting effort, and push the ball past the strong front row of Gadsden. The combo of setter Karlie Ontiveros and Allyson Lucht has been a productive one; I think if Ontiveros can get the ball out to middle Marcela Hanroit, especially on the quick, they might find the Panthers off guard.

Defensively, Mayfield has been pretty tough, with some good play from middle Hanroit with hitters Brooklyn Amador and Callie Chambers chipping in for assists on the block.  They’ll no doubt key on Panther Nathalie Castellanos, they’ll need to be sure to contain Gadsden’s other options (Veronica Rosen, Cristal Quinones) and ensure their back row is ready for the flurry of attacks sure to come.

I’ve said this before: defensively, Gadsden is a tenacious bunch. Look for some good pick-ups and tight passing from this group.

Over the past few seasons, this match up has always been a nail-biter. Having already met at the Sweet 16 championship match, an improved and more confident Trojan squad will make this a challenge for Gadsden.

This should be an excellent battle of two of the three top 4A schools in the state. Academy has beaten St. Pius once already at the Metro Tournament, 3-1, and that should be enough of a motivator for St. Pius to make the extra effort.

The offensive prowess of both these teams (Kaira Lujan, Academy, Sara Weber St. Pius) will mean lots of fireworks tonight. If you’re in the Metro Area tonight, it’s a guarantee this will be THE game to watch.

Some of you might be scratching your heads about this one, but I like the match to see the SonBlazers are for real, especially in district play.

Having disposed of former district rivals Mescalero in two straight matches, Mesilla Valley gets to face a scrappy Lordsburg squad. Both teams are sitting at 9-4 and you can bet the Mavs are hungry for a win and some respect in the coaches polls.

When I last saw Lordsburg at the NMSU Jordan camp there was some good talent, if not a little raw. With some matches under their belt,  I think the chemistry of setter Laura Carbajal and middle Kristine Estrada will be a headache for Mesilla Valley.

MVCS’s outside hitters Merrily Gomez and Aspen Narvaez are big girls with big arms; they will keep Lordsburg on their toes.