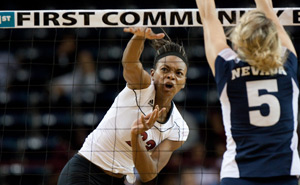 The first set saw 17 ties and the Aggies were down late at 20-19 and 23-22 but two consecutive kills by freshman Rocio Gutierrez pushed NM State to a 28-26 win late in the set.  Gutierrez finished the night with 10 kills, while senior Kayleigh Giddens posted a match-high 17 kills.

Junior Kelsey Brennan, who finished the night with nine kills and a .429 hitting percentage, started the second set with a big kill but Nevada rallied to take a 7-3 lead. The Aggies rallied backed and tied it up at 24-24 on a kill by setter Jennah DeVries.  After an error by each team, Giddens slammed down two kills to put the set away at 27-25.

DeVries finished the night with three kills, 36 assists and nine digs, as junior libero Kelsi Phillips finished the evening with a match-high 12 digs.  She leads the team averaging 3.57 digs per set in Western Athletic Conference play.