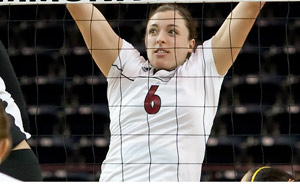 When NMSU’s Kelsey Brennan isn’t dominating the net and giving players on opposing teams facials, she’s hitting the books. Playing any sport and maintaining a 3.52 is difficult at any level–congrats on the honor.

Brennan, from Monroe, Wash., is majoring in sports medicine and currently has a 3.52 GPA.

While excelling in the classroom, Brennan has played in 89 sets for the Aggies and ranks third in the WAC in hitting percentage at .347. Brennan has 209 kills and a team-high 70 blocks.

“It takes a lot of work, but if you love it, it is worth it,” Brennan said.  “You may lose some sleep some days, but sports medicine is something I really want to do and it will be well worth the time and effort in the end

Brennan and the Aggies have three more games this season before the WAC tournament Nov. 22-24 in Las Vegas, Nevada.

You can watch Kelsey Brennan the rest of the Aggies in their final regular season game of the season on Aggie Vision, Nov. 17 against Utah State after they return home from the final road trip of the year.  The Aggies take on Idaho, Nov. 11 and Boise State, Nov. 13 in Idaho.