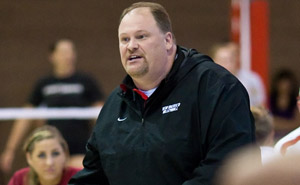 ALBUQUERQUE, N.M. – After making the NCAA tournament for the second consecutive season, the University of New Mexico Women’s Volleyball team looks to jump right back into the shark tank for the 2011 season.

Lobos’ head coach Jeff Nelson has put together a challenging schedule that includes five 2010 NCAA Tournament participants. This schedule was put together with the emphasis of returning to the NCAA tournament for a third-straight season.

“There are several matches against perennial NCAA tournament programs,” Nelson said. “I am really excited about the upcoming season and look forward to playing another very good schedule.”

The Lobos will begin the season by hosting the annual MCM Elegante Lobo Classic on Aug. 26-27. New Mexico State, South Florida and Nebraska will all participate in the Lobo Classic. Nebraska is one of the five schools on the 2011 schedule that made the NCAA tournament last year.

“I am excited to have a great opening weekend MCM tournament again,” Nelson said. “It features South Florida, NMSU and Nebraska. This will be an exciting weekend for our fans, and the team is really looking forward to it.”

UNM will spend Labor Day weekend in Flagstaff, Ariz., for the Fiesta Bowl Classic, hosted by Northern Arizona. Besides host NAU, the Lobos will also match up against Hampton and San Jose State University.

The Lobos return home Sept. 9-10 to host the Comcast/Sheraton Lobo Invitational, which will include Portland State, Montreal and UC Irvine. Portland State was an NCAA tournament team last year and UC Irvine has been a force in the Big West recently, having tied for second in the league standings in 2009 and now having finished third or higher three out of the last four seasons. Irvine is also coached by Olympian Paula Weishoff.

The east coast beckons the Lobos, as the team will travel to Pittsburgh, Pa., for the Pitt Blue and Gold Classic, hosted by the University of Pittsburgh, Sept. 16-17. UNM will battle it out against Pitt, Delaware and North Carolina Central. Delaware claimed its third Colonial Athletic Association title for the third time in the last four years on its way to the NCAA tournament last year, finishing with an overall record of 26-6.

The Lobos begin conference play on Sept. 23 with a matchup against TCU at home in Johnson Center. Texas Tech rolls into Albuquerque on Sept. 26 to try and test the Lobos at home as well.

Conference play continues Sept. 29, as the Lobos travel to Colorado Springs, Colo., to face off against Air Force in their first conference road match.

Coach Nelson is excited about the addition of Boise State to the MWC.

“They are a program that is on the rise and will be a great addition to the conference,” Nelson said. “Shawn Garus is their head coach and a former assistant of mine. He is an outstanding coach.”

Conference implications will be on the line during the month of November, as UNM faces both SDSU (Nov. 3) and UNLV (Nov. 5) on the road to begin the month. The Lobos return back home to face Wyoming (Nov. 10) and Colorado State (Nov. 12) in Johnson Center to close out regular season conference play.

“UNLV has a new head coach in Cindy Frederick who is a proven head coach that will bring a lot to the conference.” Nelson said. “Also, Look for SDSU and CSU to be very good this year along with the Lobos.”

Mountain West Conference postseason play is back after taking a three-year sabbatical. The University of New Mexico and Johnson Center will be the proud hosts of the MWC tournament set to take place Nov. 18-20. The entire tournament will be televised. The quarterfinals and semifinals will be broadcast by the Mtn. and the championship game will be broadcast by CBS SN. The last team to win the MWC tournament was UNLV in 2007. The No. 5 seed Rebels defeated No. 1 seed CSU 3-2 (24-30, 33-31, 30-17, 21-30, 15-12).

“We are extremely excited to be hosting the MWC Volleyball Tournament and look forward to showcasing the conference to all of our great fans. It should be an outstanding weekend of ball,” Nelson said.

New Mexico finished the 2010 season with a 20-10 overall record, 12-4 in Mountain West Conference play. The Lobos finished second in the league and earned an at-large bid to the NCAA Tournament. It was the second-straight NCAA appearance for the Lobos after having not made a postseason appearance since 1994. UNM loses three key seniors from last year’s team in Taylor Hadfield, Jade Michaelsen and Lisa Meeter, but still has a wealth of experience returning.

Seniors Kelly Williamson and Ashley Rhoades look to lead the way for the Lobos in 2011. Williamson received the Cherry and Silver Award at the end of last season. The award recognizes UNM’s most valuable player. Williamson recently went to China to compete in the USA Challenge Invitational Tournament for the BIP/USA Development Team. BIP (Bring it Promotions) in conjunction with USA Volleyball sent two teams of top-level collegiate players to compete in the event. Williamson is on the Red Team’s roster, which includes players from top programs around the country.