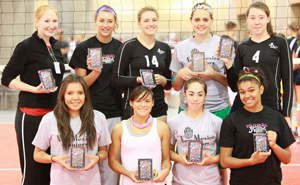 The New Mexico Juniors 18 Hinge team recently placed 4th in the 18s division at the Volleyball Festival in Phoenix–looks like they had some fun, too. Coached by Becky Walters, the 18 Hinge team consisted of the following players:
Way to go 18 Hinge!

Photos courtesy of the NM Juniors!