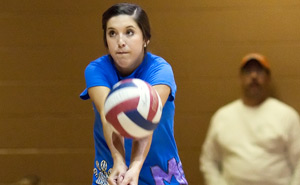 Be sure to check out my interview with Tularosa’s Hannah Syling. Hannah is a perfect example of some of the great talent in the smaller communities in New Mexico.

The El Paso Times is running a story on the El Paso area schools hitting the courts with the season starting today.

El Paso Times has ranked their top 10 and talks to several key pieces of Franklin’s team. Both Franklin and Coronado, traditional El Paso powerhouses are starting somewhat anew, but I’m a little surprised at their ranking of Coronado. I think by the time the Margaret Hussmann Tournament of Champions arrives, alot of questions will be answered.

Player-wise, a good representation of the city, including Megan Dominguez (Chapin, Wildfire – pictured above) and what will be the city’s premier player Alexia Heist (Eastwood, Wildfire), who recently gave her verbal to TCU. Expect to read much, much more about her in the future.

And their “Players to Watch”