Both UNM and NMSU players are collecting honors after the 2010 comes to a close. 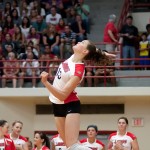 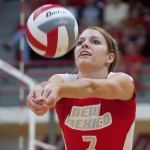 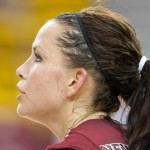 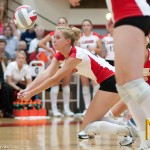 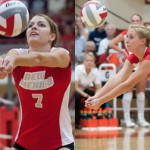 UNM finished up a very, very successful 2010 campaign, including a sweep of their in-state rivals, NM State, and a post-season appearance in the NCAA tournament. Individual highlights include academic honors for Kelly Williamson:

Kelly Williamson was named Third Team CoSIDA/ESPN The Magazine Academic All-America honors, becoming only the second Lobo volleyball player in school history to make that squad. “Kelly is the epitome of a student-athlete,” said coach Nelson. “She is a great person who has been outstanding on the court, in the classroom, and she is working to really make a difference.”

Meanwhile, both  Lisa Meeter and Jade Michaelsen capped off a fantastic season and career with the Lobos earning selections to the Honorable Mention All-American team. I’ve been lucky enough to see these two in action over the past few years, and the recognition is well deserved.

Jade Michaelsen and Lisa Meeter, two four-year seniors who were instrumental in turning around the Lobo fortunes over their four-year careers, ended their careers with national honors as the pair was named honorable mention All-America selections by the American Volleyball Coaches Association.

The pair was joined by Taylor Hadfield on the All-West Region team last week, and Meeter and Michaelsen were two of four Mountain West student-athletes to earn honorable mention honors, along with Colorado State’s Danielle Minch and Megan Plourde, who both earned the same honor last year.

“This is great of the program, and I’m very happy for both of the girls as they have worked very hard and are very deserving,” said head coach Jeff Nelson. In noting that fellow senior Taylor Hadfield was honored with honorable mention All-America honors last year, Nelson said, “I’m very proud of all of them. It has been a great run for Lobo volleyball and all three of our seniors.”

For Meeter, the honor is one in a host she has received this season. Meeter was a three-time Mountain West Conference Player of the Week, and she also was named to the All-MWC team. Meeter during the season became the third Lobo, and the third player in Mountain West history to record 1,000 career kills and 1,000 career digs, and 100 career aces. Meeter also earned Collegiate Volleyball Update’s National Player of the Week after her performance in UNM’s sweep of #13 Colorado State in November.

Said Meeter, “I feel so honored by this. I could not have made it without all the support and help from my team and coaches. This was such a nice surprise to end the season and I feel so blessed to have been a part of New Mexico volleyball.”

Michaelsen became the first Lobo to break the 4,000-career assist mark with 4,174. Michaelsen was the conference’s Setter of the Year and an All-MWC selection, as well as a semifinalist for the Lowe’s Senior CLASS award.

“This honor is such an incredible surprise and great recognition for the program. It’s a testament to how far it has come in the last four years,” said Michaelsen. “Congratulations to Lisa who had a tremendous year, and I can’t thank the coaches and my teammates who have made all these incredible honors possible.”

The Lobos finished the season 20-10, finishing second in the Mountain West with a 12-4 record a school MWC high for wins, and a second straight NCAA Tournament berth.

To top it all off, UNM head coach Jeff Nelson was named Mountain West Coach of the Year for 2010.

New Mexico State had a rough season, but played tough through the injuries and difficult schedule. That didn’t keep Jennah DeVries from getting noticed and selected to the honorable mention team.

DeVries, a native of Sedalia, Colo., earned the honor for the second consecutive year and is only the second NM State volleyball player to earn multiple All-American honors. Kim Oguh was named an All-American from 2005-07.

She led the Aggies and was second in the Western Athletic Conference with 11.06 assists per set. Dani Mafua of Hawai’i, was also named an honorable mention selection. Mafua didn’t have many more assists than DeVries as she averaged 11.19 per set.

DeVries continues to impress everyone and continues to move up the record’s ladder with 2,833 assists in her career. She is now No. 6 on the all-time list passing Jill Hendry who played for NM State from 1987-88. She is now behind Jessica Rombach (1996-99) who posted 3,031 assists in her career while Christine Jinbo tallied 4,294 from 1993-96 to sit atop the all-time list.