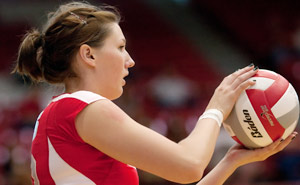 HONOLULU, Hawai’i — The University of New Mexico volleyball team lost to No. 4 Hawai’i in its final match of the Hawaiian Airlines Wahine Classic, 3-0 on Saturday night at the Stan Sheriff Center in Honolulu. Senior Taylor Hadfield led the offense with 13 kills as the Lobos dropped to 2-4 on the season. Hawai’i improved to 5-0 and will face No. 10 USC in the championship match on Sunday, Sept. 5.

The Lobos hung with the Rainbow Wahine to an 8-8 tie in the first set before UH went on a 7-0 run. Wahine All-American Kanani Danielson recorded three kills during the run as Hawai’i upped the lead to 15-8. UNM never recovered from the run, only cutting the lead to four at 16-12 on a Danielson error. UH took the first set, 25-15.

In the second set, the Lobos stayed with UH at 5-5, until a 5-0 run put the Rainbow Wahine ahead 10-5. UNM struggled to get back in the set, losing 25-14 going into intermission.

The third set brought about a line-up adjustment and a tighter set for the Lobos. The teams tied seven times, including at 16-16 on a big triple block by Ashley Rhoades, Kelly Williamson and Jade Michaelsen. UNM took the lead, 17-16 on a Williamson kill. After a UH timeout, the teams tied three more times before the Rainbow Wahine took a three-point lead, 22-19. At match point, Hadfield put down a kill to cut the lead to 24-21. Danielson closed the deal with her final kill for the win, 25-21.

Lisa Meeter led the back row defense with 15 digs, while Rhoades led the front row with four blocks.

New Mexico returns to action on Sept. 10-11 when it hosts Sacramento State, SMU and UC Santa Barbara in the Comcast Lobo Challenge.