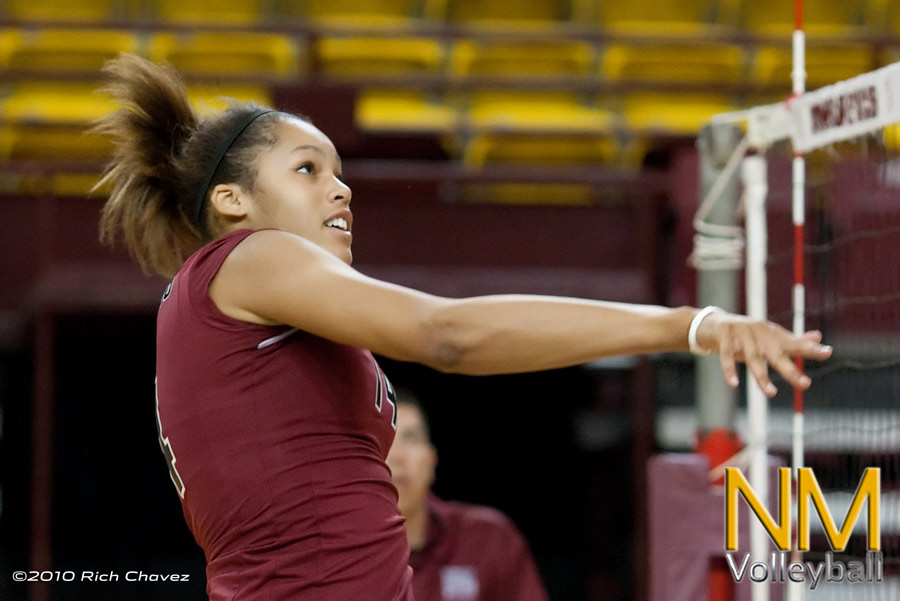 LAS CRUCES, N.M. (June 9, 2011) – New Mexico State University head coach Mike Jordan has announced the 2011 volleyball schedule, which features seven teams that made it to last year’s NCAA Tournament and five teams that were either in the top 25 or receiving votes in the national poll.

The Aggies open the season with Nebraska, who made it to the third round of the NCAA tournament, in Albuquerque August 26 during a tournament hosted by UNM. Other NCAA Tournament participants on the Aggies’ schedule for 2011 include LSU, Northwestern, Utah State, University of New Mexico, Hawai’i and Colorado State. CSU finished the 2010 season ranked No. 16 in the nation, while the Cornhuskers were the highest ranked team that NM State will face this year as they came in No. 7 at the end of the season.

“Its great we’re back up to 14 home matches,” Jordan said. “We’ve also got five non-conference matches against teams that were in the NCAA tournament last year and three of those are here at home. We’re looking forward to the season. ”

NM State opens the season with a MCM Elegante Lobo Classic in Albuquerque Aug. 26-27 before playing its first home match, Sunday, Aug. 28 against Nicholls State. The Aggies then host a tournament at the Pan American Center, Sept. 2-3, featuring Grambling, LSU and Arkansas-Little Rock.

The Aggies follow their home tournament with a tournament hosted by Texas State, which included the likes of Louisiana-Lafayette, Houston Baptist, and Northwestern State. After a home game against UTEP, Sept. 13, the Aggies travel to Illinois where they will face Colgate, Duquesne and host team Northwestern in a tournament.

The WAC schedule features home and road matches with NM State opening conference play at home against Louisiana Tech, Sept. 24. The Aggies then face Idaho, Sept. 29 and WAC Tournament Champions, Utah State, Oct. 1 at home. The Aggies fell in two out of three games against the Aggies of Utah last season and are looking to bounce back against them this year. WAC foe Hawaii heads to the Pan American Center, Oct. 12 and the WAC season ends with the WAC Tournament, Nov. 21-23. For the third-straight year the WAC Tournament will be held at the Orleans Arena in Las Vegas.

“WAC play should be tough again this year as teams up-and-down the league continue to get better with each season that passes,” Jordan said.

The Aggies also host UNM in a non-conference match, Tuesday, Oct. 4 and host Colorado State after the WAC Tournament, Nov. 26.

Fans can keep up with the 2011 Aggie volleyball team at www.NMStateSports.com.